WWAV Stands with The #FightFor15: We Deserve More

At Women With A Vision, we see first hand how low wages and economic insecurity impact women and our communities. Economic instability is often the precursor and/or an intricately-linked compounding factor to the many injustices that our clients face, especially when they find themselves at the intersection of race, gender/gender expression, sexual orientation, and class. /being black, being a woman, having a different gender expression, being gay or bi, and just being poor.

We see the fight for living wages as a Reproductive Justice issue. The term Reproductive Justice was coined by Black women and championed with women of color as a way to push the mainstream reproductive rights movement beyond a focus on just abortion and birth control. Black women pushed for the movement to encompass our right to health and safety not just during family planning and childbirth, but as we raise our children. We have the right to raise our own kids, without being afraid that DCFS is going to take them away.  We have the right to have safe and healthy neighborhoods for them to play in. Because of the ways oppression intersects along the lines of race, gender, sexuality, class, and other factors, we understand that not all women have equal choices about one’s body and family, and that a true movement for reproductive freedom had to include an analysis of the racial,, cultural, and structural and especially, the economic constraints on women’s power.

1 in 4 Black women lives in poverty in this country, which is not surprising when you consider that Black women are disproportionately represented in minimum and low wage work (they make up 9.8% of all minimum/low wage workers). With Black women twice as likely to head household than women of other races, their economic insecurity impacts families and entire communities. In 2013, nearly ½ of all Black single mothers lived in

poverty with 52% reporting they had difficulty paying monthly utility bills, 33% saying they had problems paying rent.

Neither the Fight For $15 or the struggle for a livable wage are about making extreme demands, but simply demanding the right for millions of Americans to work and live in dignity. This is a demand, as this woman reminded me, Black Americans, and Black women have been fighting for for centuries.

We see this in the .78 cents statistic, which doesn’t underscore how women of color stand at the intersections of both racial, gender, and class oppressions, making our labor and our 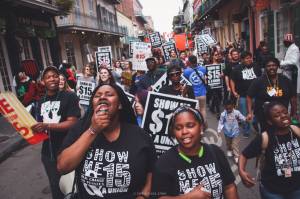 bodies worth less. Black women make only 63 cents for every dollar a white man makes for doing the same job! We see this with Black women and Domestic Violence laws which have led to their incarceration instead of protecting them. We see this in the women criminalized for survival sex work when they are systematically denied access to jobs that provide them a living wage. As a statement from BYP100NewOrleans stated, New Orleans is the incarceration capital of the world meaning the city has a large number of residents who are systematically denied access to employment with living wages. The discriminatory and racist nature of this country’s economic system disproportionately criminalizes a large number of Black and brown people, and it economically traps them into low wage work, sometimes forcing people to return to criminalized means of supporting themselves and their families to survive.

The Fight For $15 must be one centered on the economic rights of the most vulnerable; Black women, Black LGBQ folks, Black Trans women and men, formerly incarcerated people, and people living in poverty. The fight for unions and labor protection is incomplete if we do not center the demands of street based sex workers and those who are forced by circumstance or choose to exercise their bodily autonomy to engage in street based economics in a society that limits their economic options. That is why today, on the Fight For $15 National Day of Action, Women With A Vision stands in support of low and minimum wage workers striking across the country for their rights. We also stand in solidarity with sex workers and other laborers whose work is criminalized and call for labor organizers not to forget their unique intersections of labor, (lack of) workplace protection and social stigmatization. 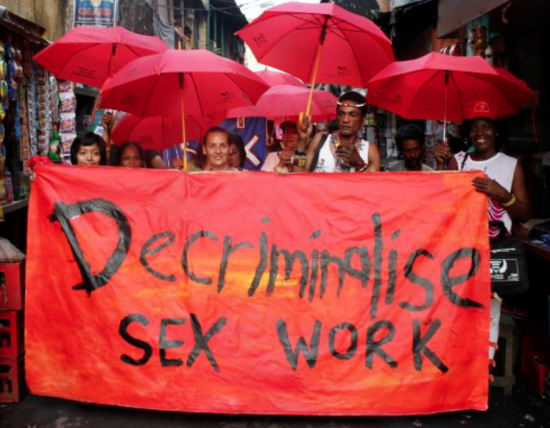