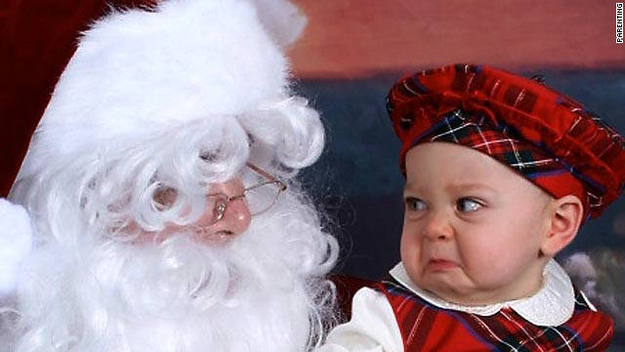 Image from Buzzfeed Post: 40 Images of Santa and Crying Kids

I’ve never really been that into Santa Claus.
When I was little, my parents didn’t bring me up believing in the tale of the man who traveled across the world delivering a bounty of presents (but only seemingly to kids in white, wealthy countries from all the books/commercials…), and either way, I was a pretty skeptical kid so I’m not sure I would have believe them if they tried to convince me of his existence. Still, I can admit, there were times growing up that I wished I had a holiday figure I could look forward to seeing during the holiday season.
Now I work at Women With A Vision in New Orleans, a Reproductive Justice organization rooted in Black Feminist practices that does grassroots policy work with marginalized women across the Deep South. Recently, we were sitting in the office talking about the holidays and how many of us were not raised believing in Santa Claus. Our Executive Director, Deon Haywood, spoke about how when she was a teenage mother, she worked 2-3 jobs and put items on layaway in order to provide for her children, “After all that work, I wasn’t about to let some rosy cheeked white man take credit for providing for my children. I was young and  poor and didn’t want my kids to be left out, so I worked hard to make sure they weren’t. We kept the holiday spirit, but we didn’t lie about where it came from.” She went on to say, “We teach our kids not to lie, but then lie to them all the time and teach them to ignore the reality of the things around them, especially during the holidays.”
Holidays, as understood in mainstream America, are a time for families to take off work, get together and be thankful for all of the things they have in their lives. But at times the reality for many Black families and poor families in this country is that the holiday season is a reminder of what they lack in their lives and the less than cheerful conditions they and their communities are in.
After our conversation, we sat and imagined what it would be like to have a holiday figure that not just wished us happy holidays, but reminded us that the holiday season should not be a time of erasure for the issues we and the communities we live in are facing and came up with the idea for #BlackFeministSanta.
Check out the series of holiday greetings we imagined for our heroine after convincing Deon to bring a Santa hat to the office one day… 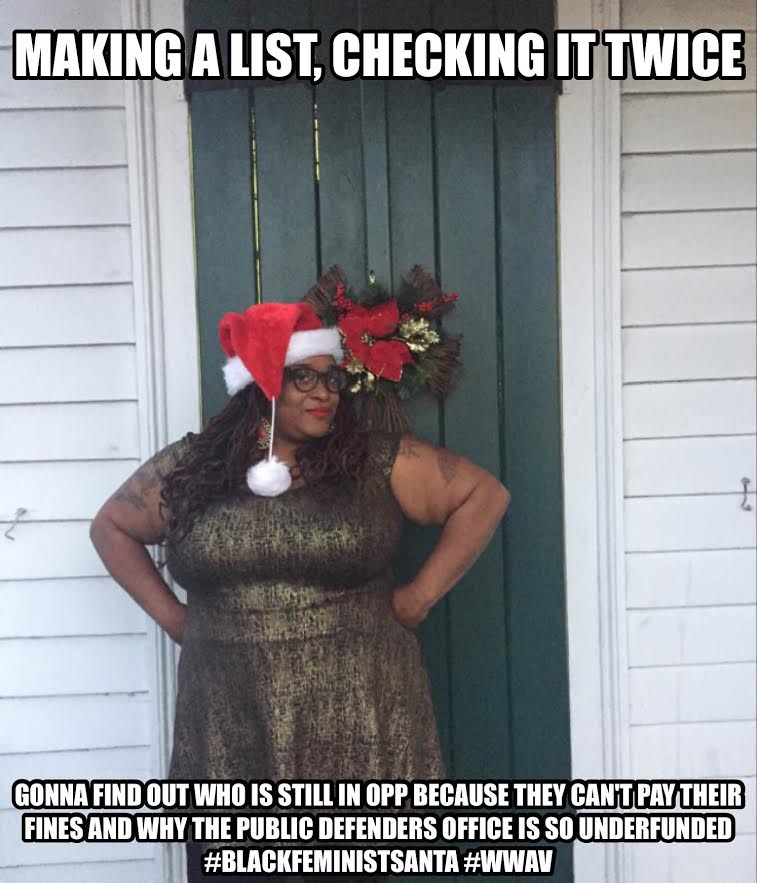 In 2015, New Orleans made it onto John Oliver’s late night show Last Week Tonight and into national sources when the Orleans Public Defenders Office launched a crowd funding campaign after being faced with a million dollar deficit due to statewide budget cuts. The city made national headlines again when it was called a modern day debtors prison after 6 plaintiffs brought a class action suit against the city’s district court alleging judges, court officials and others have been “running an illegal scheme in which poor people are indefinitely jailed if they fall behind on payments of court fines, fees and assessments” in a clear case of the criminalization of poverty. 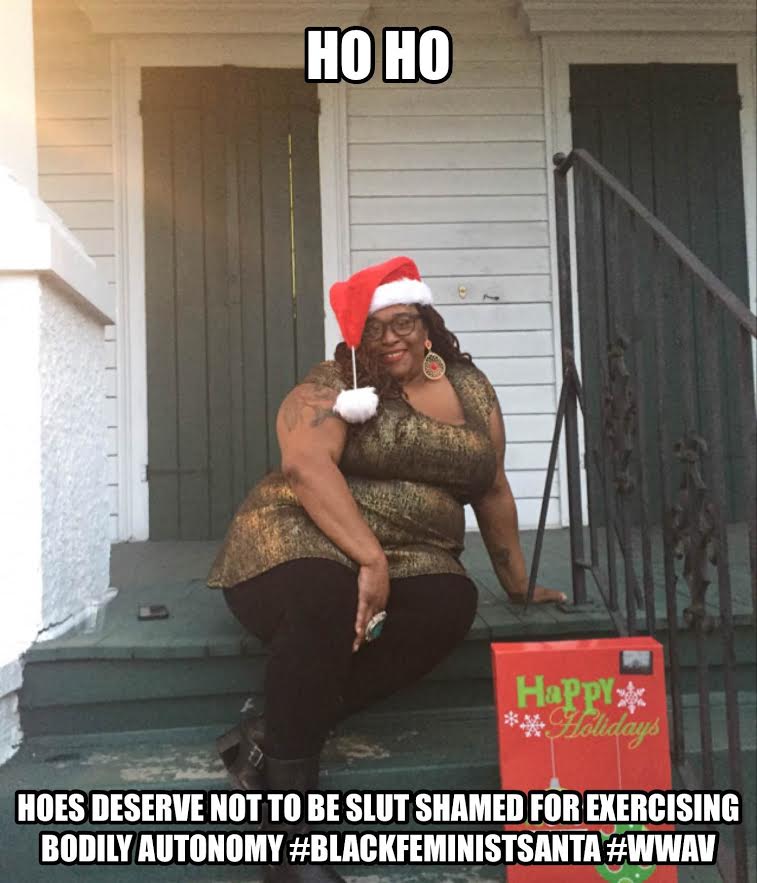 Ah slutshaming. America’s pastime. No matter how far we seem to progress as human beings, we just can’t seem to wrap our heads around the fact that women are sexual beings who should be in control of their own bodies. This became alarmingly clear earlier this year when Amnesty International was set to take a vote on its stance on the criminalization of sex work (spoiler alert: they voted yes because sex workers are human beings and Amnesty is a human rights organization), and a group of mostly white actresses from Hollywood penned a letter calling on Amnesty to vote ‘no’, because of course, they, the women of Hollywood, would know more about international sex workers and their needs (even though clearly they were conflating sex work and sex trafficking) than international sex workers themselves who were pressuring Amnesty to vote for the decriminalization of sex work. Wouldn’t it be nice if we lived in a world where we trusted women, especially women of color to be autonomous with the choices they make in their daily lives from work, to how they dress, to who they love etc etc etc.?!?!?
Which leads us to our next #BlackFeministSanta meme… 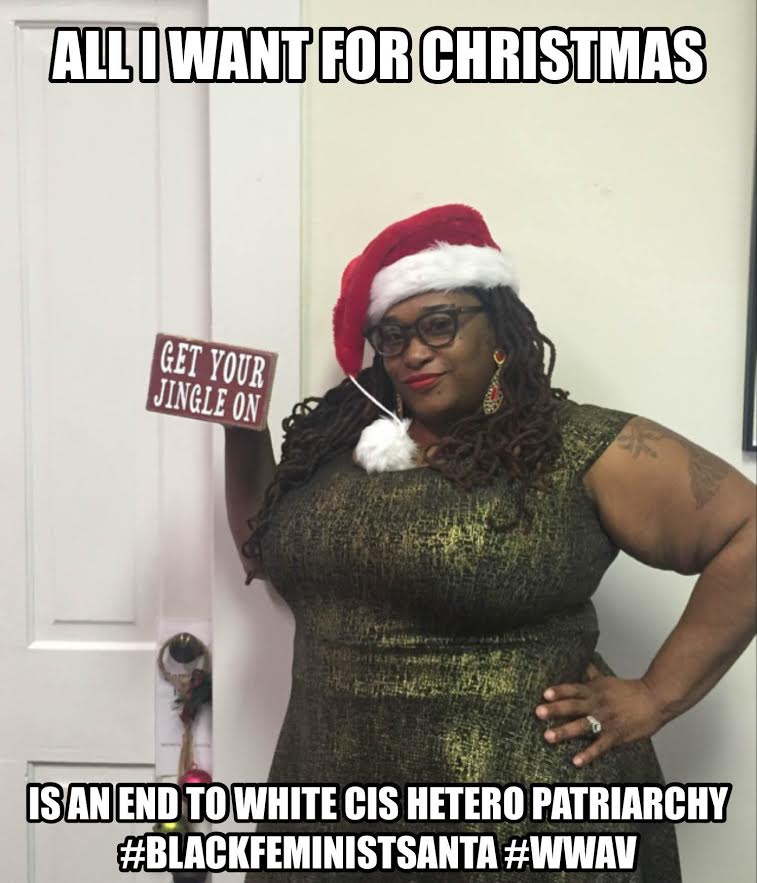 This one was borrowed from bell hooks’ Christmas wish list from when she was 11. 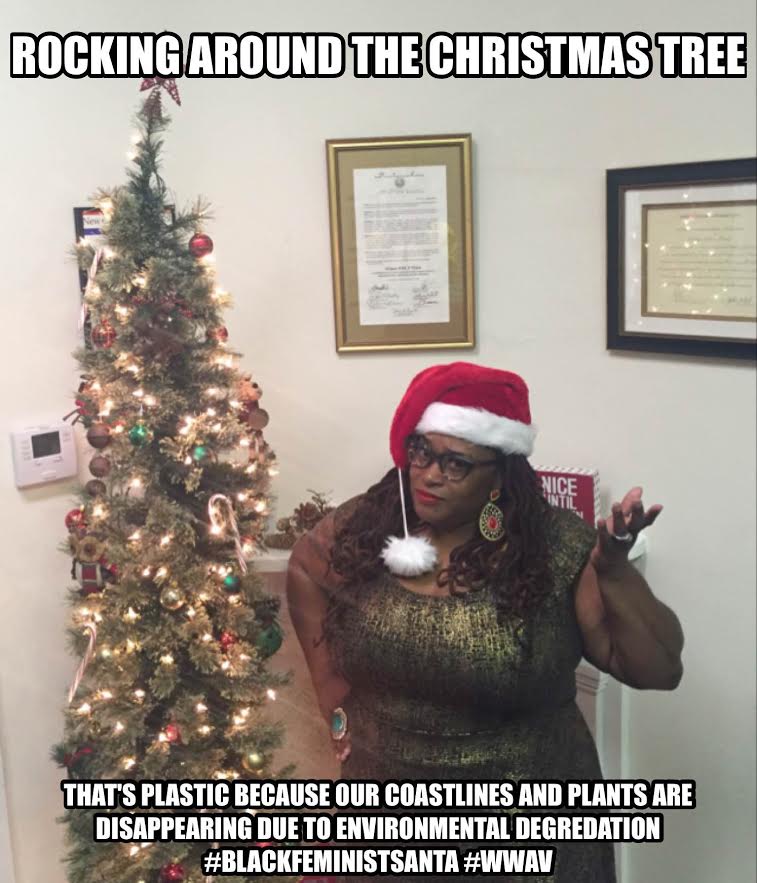 All around the world, people are feeling the effects of environmental degradation, but across the Gulf South the rapid environmental change is having a startling effect. Here in Louisiana, we’re facing some pretty high levels of wetlands loss. Check out these 3 startling facts from Restore or Retreat: 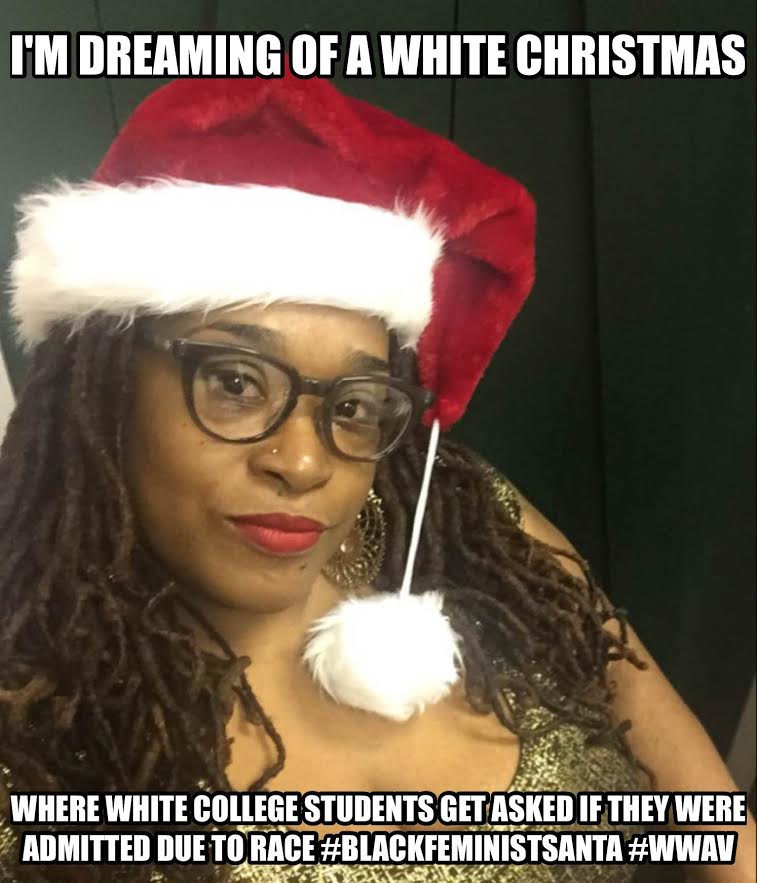 Oh Abigail Fischer. The poster child for white mediocrity. White privilege’s favorite granddaughter.
Her case against Affirmative Action made it TWICE to the Supreme Court despite it not having any merit whatsoever. For starters, her GPA and SAT scores weren’t high enough and she didn’t have enough extracurriculars to get into UT Austin, the school she was denied admission to. Secondly, even though UT Austin did offer provisional admission to students with lower scores, only 5 were Black or Latino while 42 were white. Third, 168 Black and Latino students with grades just as good or higher than Fischer didn’t get admitted to UT Austin that year. Fourth, Affirmative Action has actually disproportionately helped white women.
Also, being white in America means you usually have more access to resources like better public schools, money for private schools, SAT classes, and generally things that increase your likely hood of attending college, making it easier to argue that white folks got into college because they are white than the alternative.
At the end of the day, Abby was mad that she couldn’t go to the school she felt she had the right to go to because of legacy. She discovered the limits of white privilege and it scared and angered her. Oh well. Black twitter came back pretty quickly with a hilarious hashtag #StayMadAbby that was a beautiful showcase of #BlackExcellence in academia, though to be clear, #BlackExcellence can be and is found in all kinds of places. 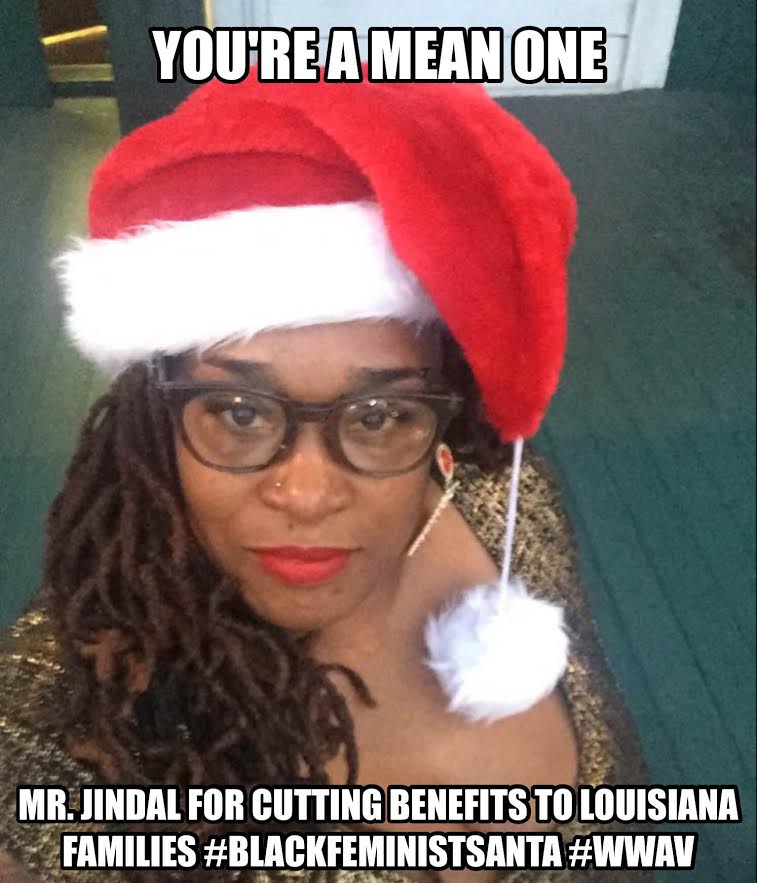 This year Bobby Jindal, soon-to-not-be-Governor of Louisiana, refused to waive a federal requirement that people work in order to receive nutrition assistance. In what has been called Jindal’s “starvation plan,” 62,000 people could see benefits cut. According to STAND with Dignity, workers in New Orleans struggle to find legal employment that pays a livable wage leading them to name the plan “Jindal’s starvation plan.” NOLA.com shared the story of a woman who “works for $9 an hour but can’t get scheduled for more than 15 hours a week. Under the changes to the state program, she wouldn’t be eligible for food stamps.” 20 members of STAND also announced that they will fast for 15 days in solidarity with families going hungry across the state. 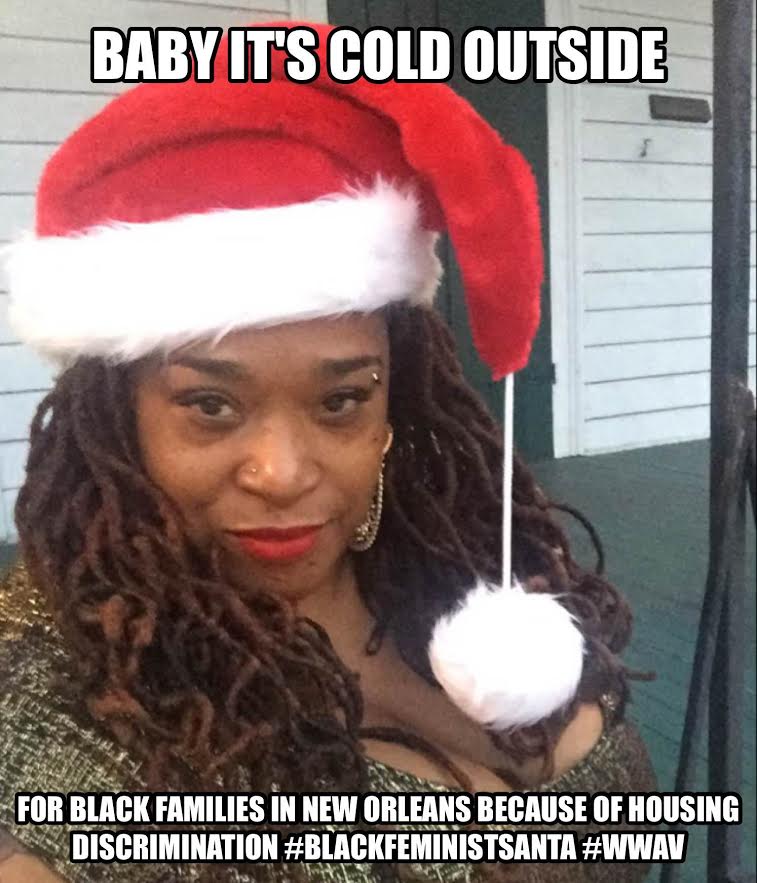 Last year, the Greater New Orleans Fair Housing Action Center sent two “mystery shoppers” with the same income, careers, and rental histories but different races (one white, one Black) to view or apply for 50 apartments in wealthier neighborhoods in the city. GNOFHAC’s investigation found that the Black tester was denied the chance to rent of “treated unfairly” (“failing to show for appointments, ignoring  follow-up inquiries or failing to mention benefits offered to the white testers, according to the report”)  44% of the time. The report concluded that “race plays a significant part in determining whether one can find a home in neighborhoods that offer the greatest opportunity for positive life outcomes.”
(On another housing note, the price of housing in New Orleans has skyrocketed in recent years, leaving us currently 6th in U.S. cities in increasingly affordable rent. In a city where race and class overlap so undeniably and gentrification seems to be on overdrive, the question was recently asked, “Where will working poor live in future New Orleans, if gentrification continues?“) 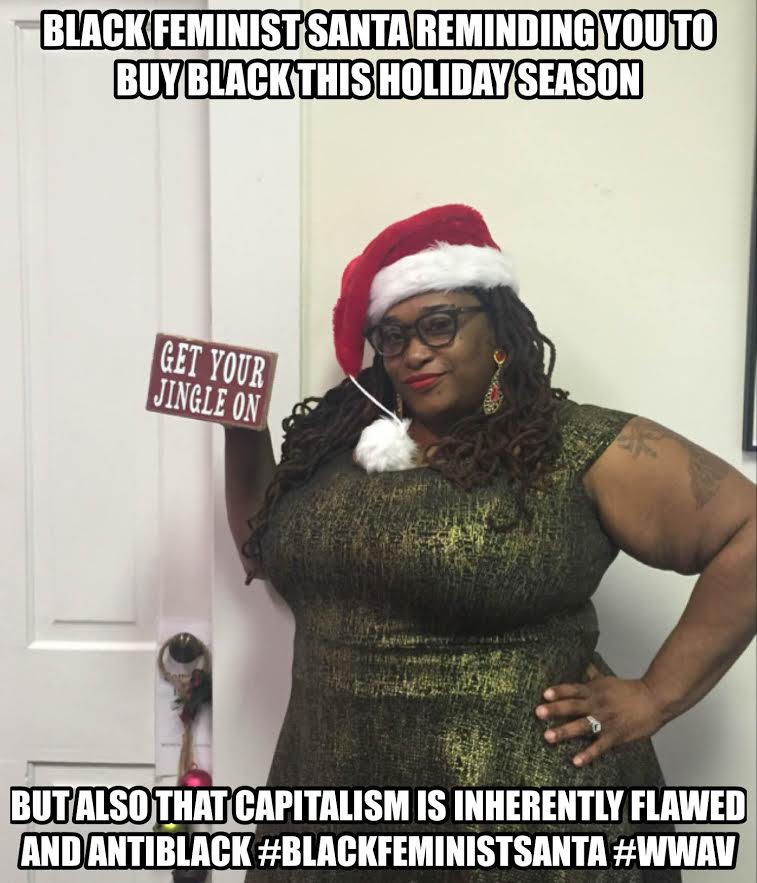 This past Black Friday, Black people across the country answered the call to flex their economic power by boycotting Black Friday or pledging to only support Black Owned Businesses during the holiday season and throughout the year, “#BoycottBlackFriday, #BlackFridayBlackout, and #NotOneDime are all campaigns that, through social media and existent protest, seek to cause a decline in Black Friday sales and to “redistribute the pain” (also a hashtag of dissent). The goal: to attain retribution for the unjust killing of blacks through a mighty economic blow.” Those involved in organizing the actions demanded that we not let the holiday season pass without remembering the Black families that are not able to celebrate due to state and structural violence against Black bodies. It’s clear they argue, that green is the only color that motivates the powers that be to listen in this capitalistic system, so, in addition to on the politically based actions, organizers have been organizing economic actions such as the Black Friday boycott. It should be noted that capitalism is an economic system founded and rooted in deep income inequality. In a country with such a long history of using white supremacist logic to justify dehumanizing and racist labor practices, it becomes pretty clear that American capitalism is inherently anti-Black. Reinvesting money back into the Black community may actually still be working in many ways to maintain an anti-Black oppressive economic system. 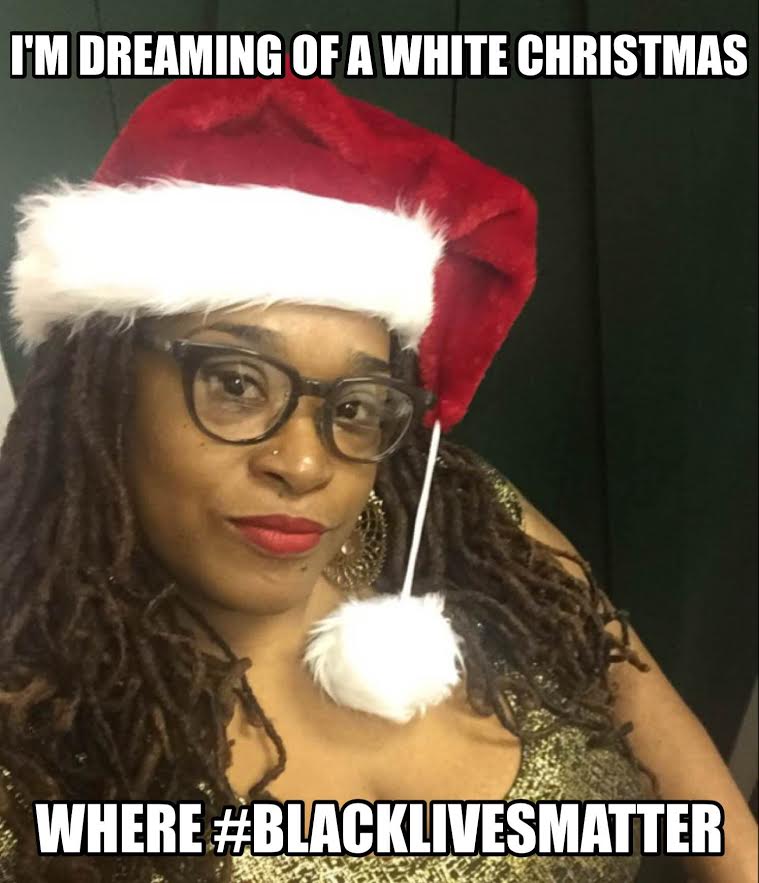 I’m sad that this is one we still have to say, to dream about this holiday season, but it’s true. We don’t live in a country that shows us that #BlackLivesMatter. From the local resistance to removing white supremacist symbols, street names, and monuments to the nationwide assault of Black people of all genders and gender presentations, #BlackLivesMatter is a rallying call and plea that should not have to be said. But as long as we have to say it, we are going to keep fighting to create a world where we don’t.
————————————————————-
Share these #BlackFeministSanta memes this season as a reminder that the holiday season is not just a time to celebrate, its also a time to continue to fight against the issues that plague our communities before, during and after the holiday season.
You can even come up with your own #BlackFeministSanta meme, just snap a picture of yourself wearing a Santa hat, go online and make a #BlackFeministSanta and share it with the hashtags #BlackFeministSanta and #WWAV and we’ll share the ones our staff like the most on our blog!